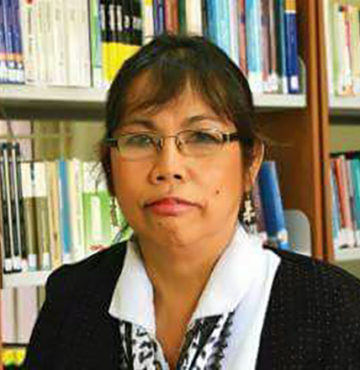 Prof. Ofelia Omitogun obtained her BSc and MSc Zoology degrees in the University of the Philippines (UP), Diliman Metro Manila. After working as Research Assistant and Instructor (Assistant Lecturer) at UP College of Agriculture, Laguna she received research fellowships from World Fish Centre now based in Malaysia and Israel on tilapia genetics and aquaculture. Then she obtained a scholarship and fellowship from the French Government and USAID (Agency for International Development)-Israel Bilateral Collaboration to do her PhD in Aquaculture Genetics in Israel and France. Then she got a three-year postdoctoral fellowship on animal biotechnology from Institut National de la Recherche Agronomique and European Community-Funded Pig Map Project.
In 1991 she returned to the Philippines as Associate Professor at the University of the Philippines Institute of Biology and National Institute of Molecular Biology and Biotechnology. In 1995 she worked as Molecular Biologist at the International Institute of Tropical Agriculture, Ibadan, Nigeria where she had the chance to apply her expertise in animal genomics to plant biotechnology.

In 2000 she joined as Reader (Associate Professor) the Faulty of Agriculture, Obafemi Awolowo University (OAU) and has been teaching genetics, fisheries and biotechnology. She is doing research in fish genetics and breeding and biotechnology as well as animal genetics and biotechnology where she had obtained national and international grants. She became a Professor in 2005, and served as Editor-In -Chief of Ife Journal of Agriculture from 2004-2006 and Head of Department of Animal Sciences from 2006 to 2010. While on sabbatical leave from OAU at Elizade University (EU), a private University about 100 km away from OAU as Professor of Biological Sciences and served as Head of the Department of Biological Sciences and Acting Director of the EU’s Centre for Biotechnology Resources and Development.

She has been serving as Chairman of the National Technical Sub-committee anchored by National Centre of Genetic Resources and Biotechnology on the Registration Naming, Release of Fish Breeds and Strains since 2015 and Chairman of the Partnership, Research and Development Committee of the Association of Nigerian Fisheries Scientists (ANIFS), 2018 to date.